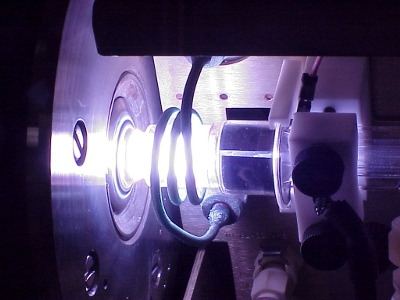 Inductively Coupled Plasma Techniques can be very powerful tools for detecting and analyzing trace and ultra-trace elements. Over the past years, ICP-MS has become the technique of choice in many analytical laboratories for providing the accurate and precise measurements needed for today’s demanding applications and for providing required lower limits of detection.

As a leader in trace element analysis, EAI offers its customers a range of ICP methods capable of handling the majority of applications for which radio-analytical techniques may be unsuitable. The following descriptions provide an overview of the Quadrupole ICP-MS, High Resolution ICP-MS, and ICP-OES systems currently utilized by EAI.

ICP-OES is another ICP technique which shares a similar sample introduction system with ICP-MS. As with ICP-MS, the sample is atomized and ionized in argon plasma. In ICP-OES, an optical spectrum with a typical range of 165 – 800 nm is viewed and measured, either sequentially or simultaneously. ICP-OES systems typically have two to three orders of magnitude higher detection limits than ICP-MS. However, ICP-OES can serve as a valuable analytical tool when certain lighter elements (e.g., S, Ca, Fe, K, and Se) that suffer considerable interferences with ICP-MS require identification and quantification. Additionally, ICP-MS manufacturers have now eliminated negative ion capabilities from their instruments to reduce cost of manufacture. This leaves ICP-OES as the only viable atomic spectroscopy method for determination of Cl, Br, and I.

A Perkin-Elmer Optima ICP spectrometer is used for routine ICP-OES analysis. First, a high-energy radio frequency field is impinged upon a stream of argon gas. Then, a spark is used to ionize the argon gas, which forms a sustained plasma due to inductive coupling with the high energy radio frequency field and the continuous supply of fresh argon to the plasma torch. This plasma has solutions passed into it in the form of a fine aerosol. The aerosol is dried, the dried particles broken apart, and the individual elements are excited by interaction with the excited state argon in the plasma. As each atom returns to its ground state from the excited state, they emit light at wavelengths characteristic of the elements from which they originate. The emission intensity for each element is monitored for each standard solution and a calibration curve of emission intensity versus element concentration can be constructed.

The quadrupole systems offered by EAI are capable of handling high volume samples and are suitable for a majority of applications where limit of detection requirements are in the part-per-million (ppm) and low part-per-billion (ppb) range. Our quadrupole instruments are equipped with the latest in reaction cell and collision cell technology – the Agilent 7500cx systems are equipped with dual reaction/collision cells. Collision of the reaction gas with polyatomic ions from the plasma neutralizes common interferences.

In ICP-MS, a plasma or gas consisting of ions, electrons and neutral particles, is formed from Argon gas, which is then utilized to atomize and ionize the elements in the sample matrix. These resulting ions are then passed through a series of aperatures (cones) into a high vacuum mass analyzer where the isotopes of the elements are identified by their mass-to-charge ratio. The intensity of a specific peak in the mass spectrum is proportional to the amount of the elemental isotope from the original sample.

The heart of the ICP-MS is the inductively-coupled plasma ion source. Since the source operates at temperatures of 7000° K, virtually all molecules in a sample will be broken into their component atoms. A radio frequency signal (RF) is fed into a tightly wound, water-cooled, coil where it generates an intense magnetic field. Within the center of this coil is a quartz plasma torch where the plasma if formed, which is generated by “seeding” the argon gas with a spark from a Telsa unit (a device similar to a spark plug). When the spark passes through the argon gas, some of the argon atoms are ionized and the resultant cations and electrons are accelerated toward the magnetic field of the RF coil. Stable, high temperature plasma, is then generated as the result of the inelastic collisions created between the charged particles and the neutral argon atoms. These concentrations of electrons in the plasma reach equilibrium very quickly, after which the plasma will remain “lit” as long as the RF field in maintained and a constant supply of argon gas is injected into the plasma.

The plasma torch is designed in such a manner that the sample is then injected directly into the heart of the plasma. The injected sample consists of a fine aerosol, which can be derived from, but not limited to, nebulized liquids and ablated solids. As this aerosol sample passes through the plasma, it collides with free electrons, argon cations, and neutral argon atoms, causing any molecules initially present in the aerosol to be quickly and completely broken down into charged atoms. Some of these charged atoms will recombine with other species in the plasma to create both stable and meta-stable molecular species, which will then be transmitted into the mass analyzer along with the charged atoms. At this point, a special set of metal cones and ion-focusing elements are used to extract the charged atoms from the plasma into the mass analyzer.

The tongue of the plasma is directed across the tip of the sampler cone, which has a small hole opening into the mass spectrometer. The ignited jet of gasses are directed through the sampler at a rate in excess of the speed of sound which then terminates at a “Mach disk” as the gasses begin to slow. The expansion chamber terminates with another cone known as the “skimmer” cone, which is situated with its orifice located in the shock zone of the Mach disk. The ions that successfully pass through the skimmer cone orifice are first accelerated by a high voltage potential gradient, which are then passed through a series of focusing lenses into the mass analyzer.

The Quadrupole mass analyzer consists of four cylindrical rods onto which are applied both RF and DC electrical fields. These four rods are arranged in such a manner that they form one pair in the X plane, and one in the Y plane. As ions enter the Quadrupole, they begin to oscillate in both the X and Y planes, thus causing the lower m/e ions to be destabilized in the Quadrapole whenever the alternating (RF) component of the electric field exceeds the direct (DC) component. In this condition, the lower m/e ions will be thrown out of the Quadrupole and not reach the detector, thereby creating an effective low mass filter. If the direct component exceeds the alternating component then the high m/e ions become unstable, while the lower m/e will be stabilized by the presence of the alternating component making for an effective high mass filter. In the Quadrupole system, the mass analyzer is created by connecting the two pairs of rods in such a manner that the X plane acts as a low mass filter and the Y plane acts as a high mass filter. By carefully matching the two fields, only ions of a particular mass are able to resonate at the correct frequency and pass through the Quadrupole at any time. In this regard, the Quadrapole mass analyzer is a very fast and efficient system.

As noted, the Quadrupole systems utilized by EAI are equipped with reaction and collision cell technology to reduce ionic interferences during analysis. The argon plasma can contain polyatomic ions, which contribute to mass interferences under analysis conditions with traditional ICP-MS. Two examples of these polyatomic ions are ions generated by argon itself, argon dimer (Ar2+) and argon oxide (ArO+) produced when water is present. With a mass of 80, Ar2+ is an interferent for the major isotope of Selenium (Se). With a mass of 56, ArO+ is an interference for the major isotope of Iron (Fe). In traditional ICP-MS, these interferents are major reasons that less abundant isotopes of Se and Fe are utilized in their respective analyses.

Using isotopes with lower abundances results in lower sensitivities and thus higher detection limits. With traditional ICP-MS, detection limits for both Fe and Se are approximately 2-20 ug/L due to the argon plasma background and these polyatomic interferences. With reaction or collision cells, detection limits can be reduced to < 1 ug/L.

Other polyatomic species which present problems for traditional ICP-MS are as follows:

The cell is part of the ion optics bench which is under vacuum between the focusing lenses and the analyzing quadrupole (where the isotopes are separated). The cell contains a separate quadrupole or octapole to keep the ions focused, and the cell is slightly pressurized with a reaction or collision gas.

In the case of Fe and ArO+, the interference is removed by using a reaction gas of ammonia:

With the ArO+ removed in the reaction cell as a neutral species, 56Fe+ can be quantified with much better sensitivity and lower limits of detection.